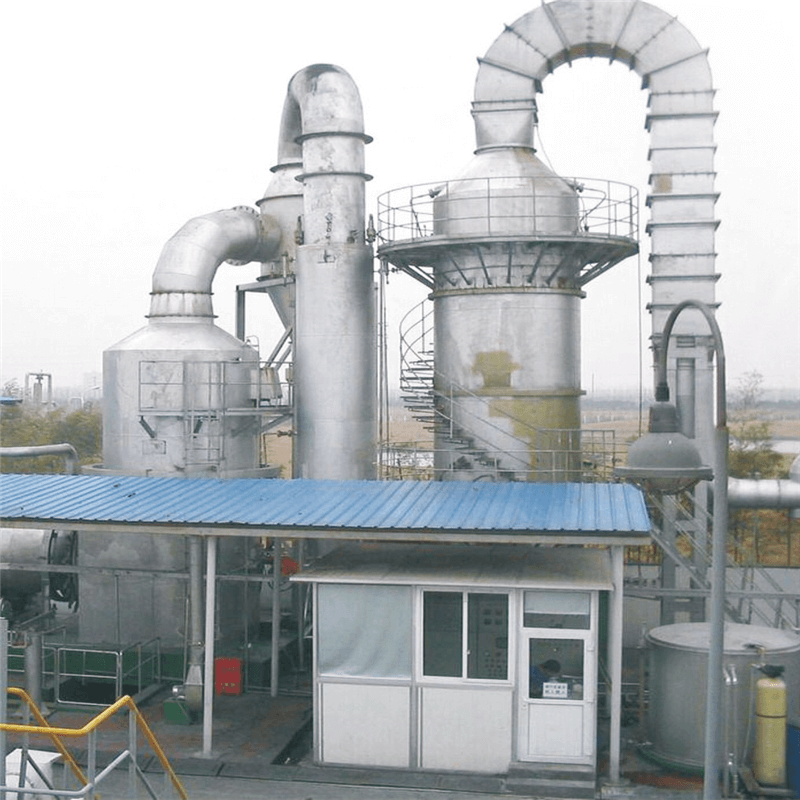 The boiler dust removal equipment uses a certain concentration (here 28% as an example) of ammonia water as a desulfurizer, generated ammonia sulfate slurry, transported to the treatment system of the fertilizer plant. The amount of ammonia used in the desulfurization process is automatically adjusted by the preset pH control valve and measured by the flow meter. Ammonia sulfate crystals are crystallized by saturated ammonia sulfate slurry in the desulfurization precipitator, and the suspended particles with a weight ratio of about 35% are generated. These slurry quilts are pumped to the treatment plant, after primary and secondary dehydration, and then sent to the fertilizer plant for further dehydration, drying, condensation and storage. While desulphurizing flue gas through the boiler dust removal equipment, the boiler dust collector also generates considerable by-products to achieve certain economic benefits.
Desulphurization dust collector is a kind of cavitation liquid layer in which the flue gas to be treated in wind energy collecting cavitation room is collided with the desulphurization liquid at the upper end and bottom flow, and the gas­liquid two phases collide and cut each other in the form of microbubble mass transfer, and the cavitation liquid layer with the impurity of the arrested set thickens gradually. Part of the breakthrough smoke buoyancy falls to the bottom of the tower, and the purified smoke rises from the chimney.
The desulphurization rate is higher than 95%, and the outlet concentration of smoke is less than 50mg / Nm3 .
There is no nozzle, which has no blockage, scaling and other problems .
The liquid-gas ratio is low, only about 20% of the air tower spray .
The failure rate is very low, as long as the induced draft fan and the liquid supply pump are normal, the device can operate stably and the operation is very simple.
The consumption of wind pressure is only 1200 - 1500 Pa .
After treatment, the flue gas does not contain foggy water droplets .
Low operating cost and investment .
The limestone slurry, lime slurry, alkali liquor, waste water of alkali liquor and the like can be used as the desulfurizing agent.
For high concentration, it is difficult to deal with the standard flue gas by general method. The flue gas with contents of S02 higher than 10000mg/Nm3 can be purified below 100mg/Nm3.